The Science Behind Homeopathy: Insights from a London Conference 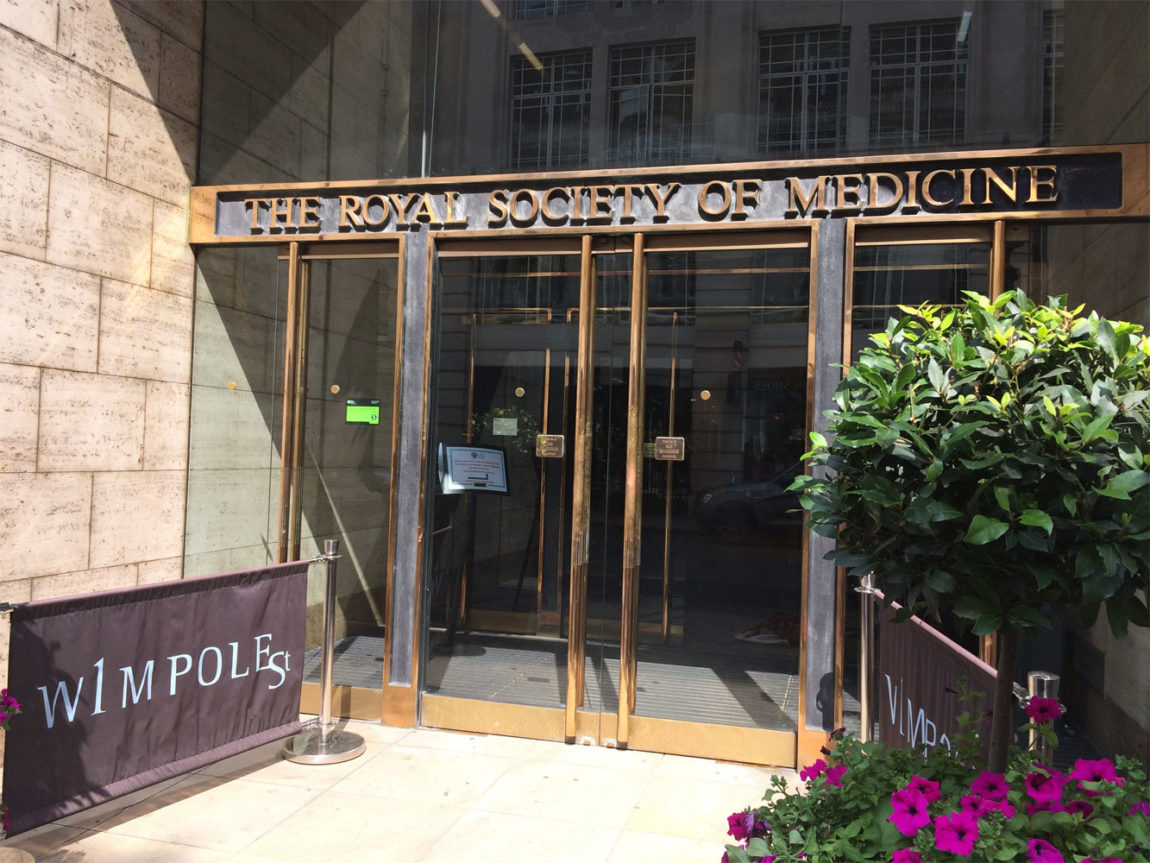 Homeopathy has such clear evidence in its favour and yet it is so quickly criticized by skeptics in the medical field because many believe it cannot possibly work. That was the experience of Dr. Peter Fisher, who knew both sides of the argument better than anyone, as the director of research at the Royal London Hospital for Integrated Medicine, the president of the Faculty of Homeopathy, and the Queen’s homeopathic physician. It was illuminating to hear him among other Nobel prize laureates and scientists at the inaugural conference on the science behind homeopathy. The conference, New Horizons in Water Science: Evidence for Homeopathy, took place at the Royal Society of Medicine in London, England, last July (2018).

This conference was inspired and designed by Lord Ward-Atherton, who was able to organize a group of exceptional scientists to join this conference in order to challenge the outdated framework of chemistry and medicine that denounces homeopathy on a scientific basis. The speakers were from an impressive variety of scientific backgrounds; namely biochemistry, physics, bioengineering, chemistry,  and medicine. The mission of the conference was to help shift the framework of chemistry and medicine to explain how homeopathy works on a scientific level, so that this much needed 200 year old natural system of medicine might be offered as a health choice alongside conventional medicine for the benefit of everyone. I personally see the need for homeopathic medicine increasing, as ultimately, freedom of choice in health care is being challenged around the world at a time when the conventional medical model is failing far too many patients. There exists an ever increasing dependence on pharmaceuticals, while patients continue to suffer ill health and chronic disease in ever increasing numbers. However, in my view, homeopathy is not meant to replace conventional medicine, but rather complement it.

Homeopathy was described as “a therapeutic system of medicine developed in 1796 based on the idea that a patient may be cured by minute doses of a natural material which in larger doses cause pathology. The preparation is unique in that it requires dilution and agitation to make the remedy active.” This rather scientific definition of homeopathy suited the tone at the conference!

The first of the two Nobel prize laureates who spoke was Prof. Brian Josephson, Department of Physics at the University of Cambridge, who spoke of the controversial Benveniste experiment, published by the scientific journal, Nature, some 30 years ago, in which it was discovered that water could be activated electromagnetically and that it has memory. Dr. Josephson went on to describe the difference between the simple static organization of water and the complex dynamic effects, explaining how we can see that water has memory. Prof. Josephson explained that a recording of the dynamic effects of sound and of sound on water can be made using a CymaScope, a device designed by the sound engineer, John Stuart Reid. When you play music to water, it develops a crystal-like structure that you can see and that changes with the characteristic of sound. In addition, each time you replay it, you can see repeated structure develops more quickly, suggesting that water does, indeed, have memory, as Dr. Benveniste suggested decades earlier. For a more in depth discussion on this lecture and Cymatics, see the news article on the Cymascope website, published July, 2018.

Next was Dr. Gerald Pollack, Bioengineering Professor at the University of Washington, and author of several books on water who spoke at length on the structure of water, beginning with the idea that because water is such a simple molecule, we tend to think we must know everything about it. Good point! However, water is, in actual fact, quite complex, with unusual behaviours, and he gave several examples, including an experiment which can be viewed on YouTube, where an unusually lengthy bridge of water forms between two beakers using just electricity, which can not simply be explained by the usual understanding of the properties of water.  Prof. Pollack added he has evidence that water has, not three, but four phases: the traditional three being water vapour, liquid water and ice, and then EZ water, or Exclusion Zone water being the fourth phase, as a kind of gel phase (my words) between solid and liquid. It is in the Exclusion Zone phase, where molecules behave like a solid in that they stick together and exclude solutes and particles, like ice, but at room temperature. My understanding on the importance of EZ water for homeopathy is that this type of water not only makes up most of our cells, but it is also where information is stored, through an ordering of the molecules H2O through multiple layers. Following succussions and dilutions, which of course is the process of preparing homeopathic remedies, the EZ water (Exclusion zone water) retains information through this ordering and arranging of molecules. This arranging of molecules works very much like a memory stick, where information is stored at room temperature with a huge potential for information storage on a very small scale. Furthermore, EZ water retains information through the formation of nanoaggregates—clusters of exceptionally small particles, naming the previous experiments of Vittorio Elia, Professor at the University of Naples Frederico II, who has worked with extremely diluted solutions for years. For anyone interested, Prof. Elia’s presentation on extremely diluted substances in 2014 on the Conference on the Physics, Chemistry and Biology of Water gives further scientific explanation as to how homeopathy works. For more information on Dr. Pollack’s speech, read the news on the University of Washington website.

Prof. Pollack’s research further showed that EZ water has a negative electrical charge, implying that water molecules arrange themselves like a battery, fuelled by heat and light, especially infrared light, suggesting that we too, as humans, gather light as energy in our cells much like plants do. This underlines the importance of drinking pure water, green plant juices and coconut water, as well as benefits of sunshine and infrared light on human health. For more information, see Prof. Pollack’s most recent book: The Fourth Phase of Water.

Next was Dr. Vladimir Voeikov, Biophysicist at Moscow State University, who gave the definition of homeopathy, quoted above. He explained how the key lock mechanism is an outdated model for molecular biology, just like a car key or a hotel key today is no longer an old fashioned key, but an electromagnetic keying system. I thought this was a brilliant analogy for homeopathy beinga medicine of the future! He went on to describe a number of experiments, starting with the Benveniste experiment that showed the biological activity of ultra high dilutions in 1988, but also carried out by many other scientists, including Prof. Elena Burlakova. In fact, he said that by 2007, more than 100 references to biological and functional effects of ultra-high dilutions have been published in Russia (unfortunately all in Russian). Further studies by Dr. Alexander Ivanovich Konovalov, Russian Academy of Sciences, describes the discovery of biologically active substances at ultra high dilutions. Prof. Voeikov further presented a study by Dr. Marian Sediak, published by the Journal for Physical Chemistry, (luckily in English) who detected nanoclusters called clouds within ultra high dilutions, and found that electromagnetic fields are necessary for the formation of these nanoassociated particles. Of course we know this from homeopathy, because remedies must be succussed or agitated and not just diluted for them to be effective.

Nobel prize laureate for Medicine, Prof. Luc Montagnier, spoke in detail about his highly complex recent experiments with DNA samples of bacteria and viruses, in which nanostructures could be detected in ultra-high dilutions using the classic model in biochemistry of polymerase chain reaction, a technique used to amplify or make copies of DNA regions. The experiments suggest that electromagnetic signals may be detected from water solutions in the form of nanostructures. It is these nanostructures, existing as liquid crystals in ultra high dilutions of water, which carry the DNA information, rather than any actual DNA being present. In other words, “water can carry very precise information of DNA,” and these nanostructure copies of the DNA suggest a bacterial origin of chronic disease. He went on to say that illnesses such as Lyme’s disease and autism may be linked to infectious disease in the future, when they can accurately be detected through an entirely new means of diagnosis, which is currently the focus of his research. An article which explains his research quite well is found in the Science in Society Archives.

On an entirely different but equally important subject, we heard from Dr. Robert Verkerk about the significance of shifting paradigms in health care. He discussed the power of belief systems in society, saying that when belief systems are strong enough, it doesn’t matter what the evidence is: “we see the evidence for the use of homeopathy, clear evidence beyond placebo, but homeopathy defies the laws of science.” This belief system has to change if we want homeopathy to be an accepted complement to conventional medicine. For more information, Dr. Verkerk founded the organization Alliance for Natural Health International, a leading non profit organization which works internationally to promote sustainable healthcare systems.

Next, a positive, exciting development in homeopathic research, the India-Israel Project, was introduced by Dr. Manachem Oberbaum, Director of the Centre for Integrated Medicine in Jerusalem, and Dr. Raj Kumar Manchanda, with the Government of India and Director of the Central Council for Research in Homeopathy. In India, there are some 300,000 homeopaths, 195 homeopathic colleges with some 100 million people who depend solely on homeopathy for their medical treatment! Working through the Jerusalem Hospital, Israel is boosting scientific research in homeopathic medicine and we can look forward to seeing those results very soon. Dr. Oberbaum has already performed some interesting research on Homeopathy in Emergency Medicine in a hospital setting.

At the end of a long but interesting day, Dr. Jayesh Bellare, Professor of Chemical Engineering at the Indian Institute of Technology, Mumbai, discussed nanostructured materials, asking the questions: what is there, how did it get there and how does it act. He explained that nanoparticles could be seen by electron microscopy, and that they arise through the process of trituration and succussion, known to homeopaths as the basics of homeopathic remedy preparation. As to how they act, he quoted the Arndt-Schultz Rule that states: small doses stimulate, moderate doses inhibit and large doses kill. As homeopaths know, homeopathic remedies stimulate the body’s healing response. These experiments presented by Dr. Bellare, were published in the respected medical journals, Langmuir in 2014 and the Journal of Physical Chemistry in 2013. In fact there is reference to these studies in a movie on homeopathy, called Magic Pills.

At the conference, I met so many interesting people, too many to name here, but I was very sad to learn that Dr. Fisher was killed in a bicycle accident just one month following the conference. He was such a strong advocate and bright light for homeopaths around the world, clearly passionate about homeopathy as integrative medicine—he will be so missed, not only for his tireless work, but also because he called for homeopaths to practice with care and not make unsubstantiated claims—important if we want homeopathy to be accepted into the field of complementary medical care. Another wisdom I took from the conference was in meeting Dr. Smith from the Faculty of Homeopathy, who mentioned that the silver lining in amongst the skepticism surrounding homeopathy in recent years has been that it has brought together homeopaths from all occupations, whether they be medical doctors, veterinarians or professional homeopaths for a single cause to support homeopathy and ensure that it remains a freedom of choice for everyone.

How to Keep Winter Immunity with Homeopathy

Colicky Baby? Homeopathy to the Rescue