Homeopathy under Fire: What the Media Understands and Misunderstands About Homeopathic Medicine 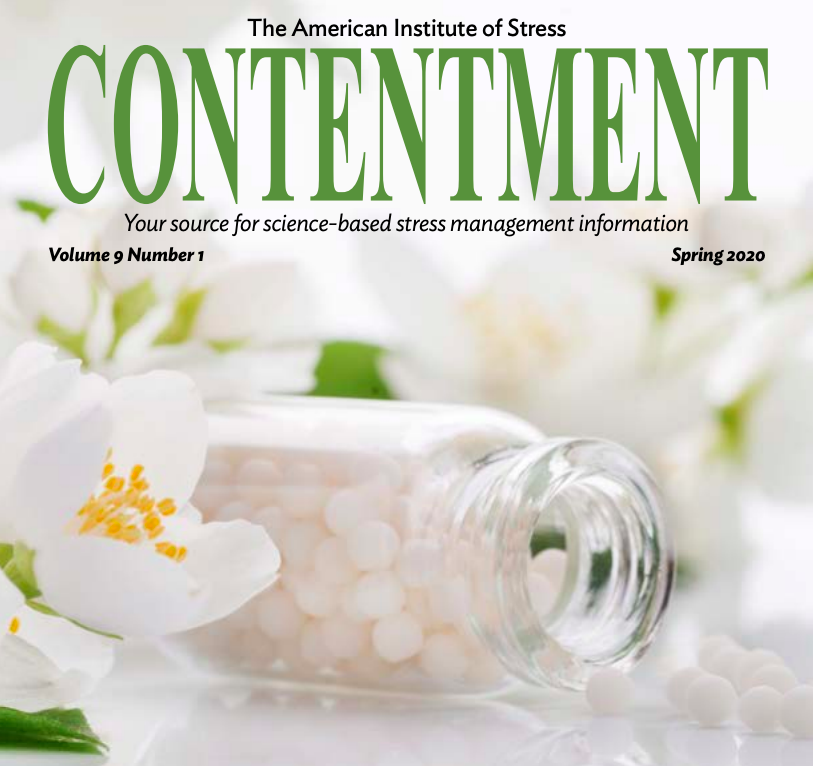 This blog is an article published in the Spring 2020 Edition of Contentment Magazine by the American Institute of Stress.

At best, homeopathy is the perfect complementary medicine and the key to raising a person’s level of health, heralded for alleviating susceptibility to short-term and chronic, debilitating illness—even reducing the need for antibiotics, painkillers and anti-depressants. At worst, homeopathy is a complete sham, a fake natural cure which only works if you believe in it. The debate about whether or not homeopathy is effective, cost effective and safe as it becomes increasingly popular in North America appears to have reached new heights of acrimony in this current age of information and misinformation.

Most North Americans are unaware that homeopathy has a 200 year history of efficacious clinical application and that more than 100 million Europeans already use homeopathy as a complementary form of medicine, including the British Royal Family, and elite athletes like David Beckham, Martina Navratilova and Usain Bolt.[1] In India, another 100 million citizens are solely dependent on this medicine for their health care because it is exceptionally cost effective.[2] Many countries include homeopathy in their national health programs, including Switzerland, Brazil, Chile and Mexico. Is it possible that millions of people, elite athletes and entire governments are being scammed?

Myth or Fact? Homeopathy has no scientific evidence to prove it works

In 2015, the Australian National Health and Medical Research Council published a report on scientific evidence for homeopathy with the conclusion, “…there are no health conditions for which there is reliable evidence that homeopathy is effective.”[3] This made big news headlines and was widely accepted as proof that homeopathy does not work beyond the placebo effect, which means that basically, you have to believe in the homeopathic medicine for it to work for you. What failed to make headlines was that four years later, in August 2019 and due to public pressure, the CEO revised the conclusion, announcing that: “Contrary to some claims, the review did not conclude that homeopathy was ineffective.”

What also did not make headlines is the finding of another report, published in 2011, which concluded that homeopathy is effective and cost effective.[4] This report was part of the Swiss Complementary Medicine Evaluation Project, which reviewed hundreds of research studies on homeopathy, along with four other complementary forms of medicine, Take note that Switzerland is home to several giant pharmaceutical companies and yet also covers homeopathy among other complementary medicines under their national health service—integrating both natural and pharmaceutical medicines.

As the debate rages on, Wikipedia appears to have taken sides, and rather than promote neutrality of information, which is its mandate, has refused to include studies on homeopathy which show its efficacy. This scepticism on the part of Wikipedia extends to other complementary medicines, including chiropractic and acupuncture, which it calls “pseudoscience.” A petition has alerted consumers to this discrepancy.[5]

The evidence in support of homeopathy on the internet is surprisingly hard to find unless you know where to look. PubMed, an online source of research is an excellent unbiased source of information and the Homeopathic Research Institute is another, since it lists all research on homeopathy. While not all studies show clear or positive results, most do; the research is far-reaching, including studies on the effect of homeopathic medicines on cells, people, animals and plants—some research is based on clinical evidence while others include randomized double blind, placebo controlled studies, which is the gold standard for scientific evidence in this day and age. In the near future, both India and Israel will offer excellent resources, since an agreement signed between Indian Prime Minister Modi and Israeli Netanyahu in 2018 put aside millions to spend on boosting research in homeopathy.[6] With two major governments willing to support homeopathy research, the future looks promising.

Myth or Fact? Homeopathic medicines are so highly diluted, they cannot possibly work

The truth is that homeopathic medicines undergo a process of manufacturing that includes dilution and potentization, which on the surface would appear to defy the existing laws of physics and chemistry. How can a highly diluted substance become a specialized medicine, even if it does undergo a special process and even if we have studies that prove that it works in humans, animals, cells and plants?

Scientists are currently working on an explanation for how very small particles can carry medicinal properties in such ultra-high dilutions. Professor Luc Montagnier, winner of the Nobel Prize for his discovery of the AIDS virus, is presently conducting experiments to determine how “water memory” could be due to electromagnetic signals acting in ultra-high dilutions.[7] In Russia, scientists have been experimenting with the properties of water, highly diluted substances and nanoparticles for decades. Here in North America, we are catching up.[8] The work of Professor Gerald Pollack at the University of Washington identifies water’s fourth phase (the first three phases of water being liquid, solid and gas vapor). This fourth phase of water, known as exclusion-zone water, is truly revolutionary, as it appears to store information and may be the key to how homeopathic medicines can carry healing properties despite undergoing a dilution process during manufacturing.[9] In the meantime, we should accept the fact that science does not yet have an explanation for every phenomenon in nature and that we should suspend disbelief until proven otherwise—because clearly the evidence shows that hundreds of studies prove homeopathy works beyond the placebo response.

In 2017, CNN along with other media outlets widely reported on a warning issued by the FDA about the dangers of Belladonna in homeopathic teething tablets: “homeopathic teething tablets containing belladonna pose an unnecessary risk to infants and children.”[10] On the other side of the globe, a study found that 94.5% of French pharmacists recommend homeopathy to pregnant women because it is so safe.[11] To homeopaths, it seems odd that on the one hand, some claim that homeopathic remedies cannot possibly work because they contain highly diluted substances but on the other hand, others also believe them to be dangerous because they contain substances like Belladonna, albeit in ultra-high dilutions. Actually, the beauty of homeopathic medicines is that because of their special preparation, they are remarkably safe, do not interact with medications and are entirely non-toxic to humans, animals and the planet. One note of caution: the term “homeopathic” is sometimes used interchangeably with “natural,” and some product labels claiming to be homeopathic medicines are actually herbs. All truly homeopathic medicines have names with numbers and letters which verify the homeopathic manufacturing process, such as Arnica 30C as well as designation according to the Homeopathic Pharmacopeia of the US (HPUS). If the number is missing, then the preparation is herbal, not homeopathic.

Another recent argument on the dangers of homeopathy is that homeopaths use medicines called nosodes as vaccine alternatives. Of all homeopathic medicines, approximately 70% are derived from plants, and nearly 30% are derived from minerals, with less than one percent originating from animal venoms, bacteria and other non-plant, non-mineral sources. Nosodes are specially prepared homeopathic medicines that are derived from disease products, such as Tuberculinum which originates from the diseased tissue containing the tuberculosis bacteria. Actually, in homeopathic practice, nosodes are typically used when a patient is not responding to other well selected homeopathic medicines and the susceptibility of a person is more deep-seated, requiring several medicines to strengthen a person’s overall constitution. A nosode can help lift the susceptibility more powerfully; for instance, Tuberculinum may be given if a person continues to be susceptible to coughs and colds. Nosodes are uncommonly used but are irreplaceable homeopathic medicines that can restore balance and improve the body’s ability to heal itself, thereby raising the overall level of health of a person. They are not intended to replace vaccines, for instance Tuberculinum is not meant to prevent tuberculosis.

A final point: a homeopathic nosode does not act like a vaccine—it cannot create lifetime immunity for a specific illness—it can only act to reduce susceptibility by working with the body’s innate ability to heal itself—on a holistic level–just like any other homeopathic medicine.

Unfortunately, this fact cannot prevent health practitioners from making health claims, and that is not the fault of the product, but of the practitioner. In Canada, Ontario is the first province to regulate the profession, but in most other provinces and states, unlicensed complementary health practitioners (including homeopaths) are allowed the freedom to practice as long as they disclose their training. Even without being regulated, a homeopath should not diagnose or treat disease but must instead refer to a medical doctor for tests, diagnoses and treatment—and homeopaths are happy to do so. Classical homeopathy does not require a diagnosis nor does it treat disease per se—but rather, in affecting the whole person, homeopathic medicines strengthen the body’s endogenous ability to heal and rebalance itself.[12]

Homeopathy is a natural, holistic system of medicine which views health more than just the absence of disease, but rather as the well-being of the whole person—mental, emotional and physical. In homeopathy, each person is unique and each medicine is tailored to the characteristic symptoms complex of a person’s experience when ill. The goal of homeopathy is to remove the totality of symptoms by strengthening a person’s constitution. In an age where the limitations of treating disease with pharmaceutical medicines are clear, homeopathic medicines may just be the perfect complement: holistic, balancing and gentle on the body and the planet.

[12]. Since homeopathy is a complex medical science, competent practice requires two to four years of education and there exist certifying organizations to ensure a homeopath has the minimum education required to practice competently. The Council for Homeopathic Certification is an organization which certifies homeopaths across North America and upholds a strict code of practice. The Homeopathic Academy of Naturopathic Physicians has similar standards for naturopaths, while the American Board of Homeotherapeutics provides Board certification for medical physicians and osteopaths. In Ontario, the College of Homeopathy ensures that homeopaths have the minimum level training.

Facts about Homeopathy (Some May Surprise You)

Colicky Baby? Homeopathy to the Rescue